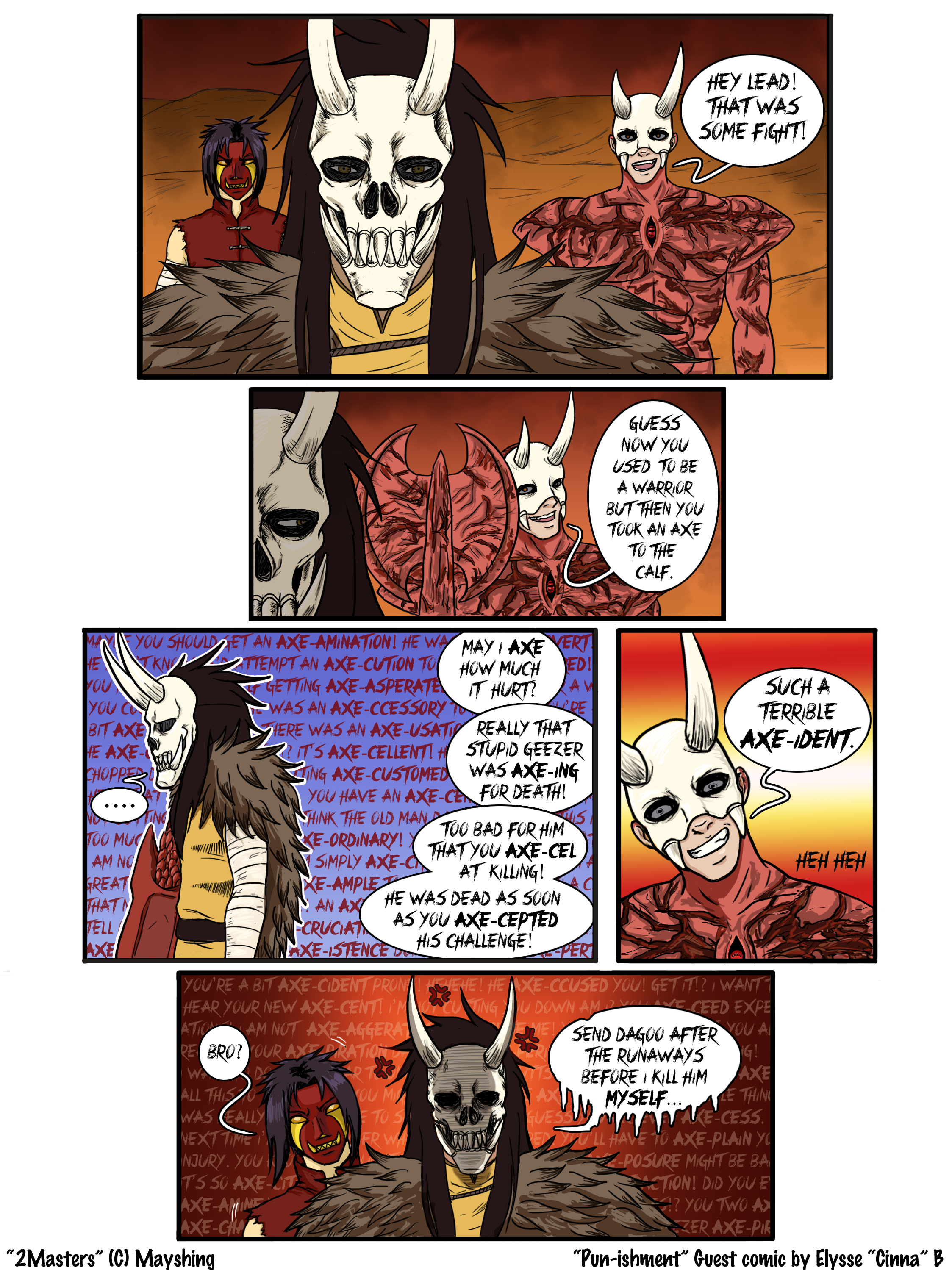 << Read Right to Left!
Featuring guest comic by studio member Elysse, aka Cinna Monroe! Featuring some morbid and wordplay humor to bookend the closing of Book 2! (Sorry Gramps! We love you even though you were a minor character used as a plot device!)

If you can’t guess from the username, she is a lover of play on words/puns… meaning this comic should come as no surprise. In her words: “There are three kinds of people: Those who love puns (and possibly abuse them), those who totally ignore/don’t understand puns, and those who hate them with a passion and would murder anyone who utters them. You can guess who is who in this comic.” Also yes, that is a total Skyrim joke reference.

(Which to spoil the fun of the saying “took an arrow to the knee”… it actually means a man got married apparently! So the Skyrim NPC probably did in fact get married but many people don’t know that meaning and took it literally, or he did in fact take an actual arrow to the knee… maybe both! But Lead for sure got a literal axe to the calf)

I first ran across this comic many years ago, if I recall last I read it they’d just found the Mamon army. In the process of a move, a divorce, and two hard drives failing, I managed to lose track of the comic – alongside a few dozen others that I only had linked on a computer that partially died. Recently I managed to resurrect that computer, and have been exploring the various comics that wound up left behind with that part of my life for awhile. To my dismay, I found that many of them just aren’t enjoyable for me anymore – I’ve grown and learned a lot in the last few years, as a person, as an artist, and as a writer, and many of the comics I enjoyed back then (in my early twenties) have proved to be rather shallower or more poorly written than my memory had made them out to be.

This one was the opposite.

I had remembered this a simple adventure/fantasy comic, good light reading. In this archive dive, I have found all kinds of interesting world details and philosophical questions waiting for those who look for them. I have found well-written and defined characters who defy their pigeonholes at unexpected moments. I have found a serious storyline that doesn’t forget that life has light, silly moments even in the darkest times – and that the darkest times can also make those moments seem small and petty. And I was saddened to find that the latest update was over a year ago.

I truly hope you have not given up on this project, and I assure you I will be checking back every once in awhile to see if it starts up again. Even if it doesn’t, thank you for providing a world and story to provoke our imaginations.

Thank you for the heart warming comment Kalietha, your kind of comment is 1 in 1000. I have been struggling with mental health and burn out for a while but have been gradually recovering back to normal. On my worst days I didn’t feel that giving up on the series was right, I have considered other things but ultimately want to stick to its original format, since I spent more than 10 years on and off developing the world. So I will be working on it again soon. Stay tuned.

With warfare never ending, a person can be an angel or a demon. All it takes is a change of heart under 2Masters that grant you powers to heal the world, or to destroy it.